If you still have problems, please let us know, by sending an email to info@icasiostore.pk . Thank you! 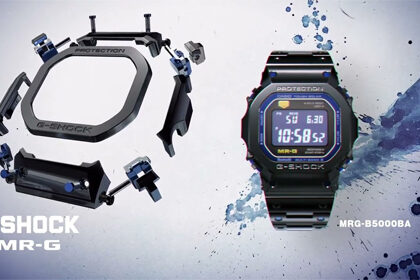 By incorporating features from the MRG-B5000, the Origin watch, which is a direct descendant of the legendary G-Shock DW-5000C, has been elevated to the status of the brand’s flagship luxury line without compromising the original’s timeless design. In March 2022, the release of this watch caused quite a stir. Only a few short months later, in the summer of this year, came the release of a new variant. The new MRG-B5000BA is an excellent addition to the lineup. The subtle use of blue throughout the design conveys a sense of calm. This isn’t just another color option; it’s a brand-new model that stands on its own as an expression of a distinct idea and a glimpse at a different facet of the series. A new shock-resistant structure and cutting-edge materials make this the most progressive realization of the Origin line’s central concept of strength and robustness.

The MRG-B5000 has been the best of the all-metal Origin series. The watch was created to finalize the Origin idea. In March 2022, both black and silver models were made available. The MRG-glossy B5000B’s black exterior cladding was incredibly accurate to the original G-Shock, and it was almost a miracle that they could recreate the iconic original in metal. The watch caused a stir among die-hard G-Shock fans, general watch collectors, and enthusiasts thanks to its high-end MR-G series vibe.

In contrast to the MRG-B5000B, which was heavily inspired by the original and featured a dial in the signature G-Shock color of red, the new MRG-B5000BA has a more subdued, yet distinctive, blue hue. The design was inspired by the traditional blue ink (ao-zumi) in Japanese calligraphy. Unlike the fiery red that is usually associated with Zen, the cool, calming hues of blue are evocative of the “quiet strength” that characterizes this branch of Eastern spirituality.

With the MRG-B5000, Casio set out to create the ultimate Origin. Putting the finishing touches on things was the main priority. The original concept for the Origin GMW-B5000 series was to create a metal watch from scratch using the Origin mold. Injection molding, using a die-cast in the same way as with the resin models, would have allowed for the production of a watch but would have presented processing challenges later in the manufacturing cycle. As an alternative, the watch went through more than ten iterations of forging and cutting before being polished and given other final touches. This method could recreate the Origin’s distinctive silhouette and shiny reflective surfaces. It was only possible to shine some of the concave surfaces of the bezel because the bezel (which surrounds the case’s exterior) was made of a single component.

The MRG-new B5000’s multi-guard structure was developed to facilitate the application of a full polish to all of the watch’s surfaces by changing their shape. Although the Origin’s design appears more straightforward than that of more complicated watches like the Master of G or the MR-G, it features several indentations and concavities that make it impossible to polish the watch’s finer concave surfaces using single-piece molding. Casio developed a new design to address this issue by partitioning the case cover and top bezel into 25 components. By cutting it into smaller pieces, you can polish the entire surface of the watch down to the tiniest detail. This is because each fragment has a flat surface.

However, the new layout did have one major drawback. The modules in the GMW-B5000 series are shielded from impact by a thick layer of shock-absorbing material between the center case and the bezel. However, the MRG-case B5000’s cover was constructed from many components, including the top bezel, lugs, case sides, and other tiny pieces. Because of this, the same structure couldn’t be used, and it was unclear how the designers would ensure the G-Shock watch’s signature shock resistance. The problem was fixed by fabricating T-shaped pieces to house the flat springs. Parts like these, which can move up and down to create a bumper effect, were installed at each of the four corners of the case cover, with additional padding added to the top, bottom, and sides of the bezel. This way, the multi-guard structure could withstand shocks from all directions, despite being segmented into smaller parts.

Materials used for the watch’s exterior were also carefully considered as part of Casio’s quest to create the perfect embodiment of the Origin concept. The MRG-B5000 may not be as scratch-resistant as the standard stainless steel or titanium Origin watches. Still, Casio took great care in selecting the highest quality advanced materials for this model. This gives the watch a luxurious look in keeping with the brand’s upper-echelon products and guarantees its high-quality exterior will remain a source of pleasure for years to come.

The MRG-B5000 uses Ti-64, a titanium alloy used in many previous G-Shock models, as its primary material. The top bezel is made from Cobarion, and the bracelet links are created from DAT55G, another titanium alloy. Japan is responsible for creating several cutting-edge materials, including Cobarion and the DAT55G alloy. The MRG-B5000 is just the latest in a long line of MR-G models that take design cues from Japanese armor; like before, it proudly displays its uniquely Japanese heritage through Japanese-developed materials.

Tohoku University’s Professor Akihiko Chiba created the material cobarion for medicine. It’s four times as hard as pure titanium and contains no allergens, so it’s safe to wear next to the skin. After being polished, the surface takes on the gleam of a precious metal. This property of the material led to its widespread adoption as jewelry and other accessories after its initial development for use in artificial joints. Because of these features, it is a good choice for use in the case of a watch. Casio was hesitant to use Cobarion for all the exterior parts because it would make the watch heavier and less comfortable to wear, despite its near-equivalence in strength to stainless steel. Casio compromised by only using Cobarion in the top bezel, which shields the display and serves as the watch’s aesthetic focal point.

Similarly, DAT55G is a titanium alloy developed by Daido Steel, a Japanese specialty steel producer. The material was first used in 2001 and became commercially available due to the high demand for golf clubs that could send the ball further and more straight. However, a few years later, the market for DAT55G plummeted due to new regulations limiting the types of materials used in golf clubs. Casio later began incorporating the material into its G-Shock timepieces after discovering it.

DAT55G has properties that are not found in any other titanium alloy. After being subjected to heat treatment, the material becomes roughly three times as hard as pure titanium, despite its initially soft and easily workable nature. Originally, Casio intended to use Ti-64 alloy in the bracelet of the MRG-B5000, but the difficulty in punching the small pinholes required to join the bracelet’s links prevented this. And while heat treatment does make the material hard, exceeding a certain temperature threshold causes the material’s composition to change, rendering permanent hardness loss. It was decided to take advantage of both of these materials by employing DAT55G, with its superior workability and potential for hardness, for the bracelet’s links, and Ti-64 alloy, which is less easily workable but offers excellent heat resistance, for the watch’s central case, cover, and other components. By combining these materials and strategically placing them where their unique properties would be most helpful, we created an exterior for the MRG-B5000 that was more durable and visually consistent with the Origin design.

Casio initially anticipated that the MRG-potential B5000s for future iterations would be supported by state-of-the-art materials with high scratch resistance and a novel structure that divided the case cover into multiple components. It was only natural to want to impart the same qualities onto the MRG-B5000, as the MR-G series has traditionally used color variations to give additional significance and narrative to the watches in the series. But first, the question of what color should represent the Origin line’s apex had to be answered.

The MR-G series, which uses an analog display, is more faithful to the original G-aesthetic, Shock’s, while the Origin series is more stripped-down. The MRG-B2000B, also known as the “Kachi-iro” (Victory Color) version, will be one example of when it was introduced in 2021. This model’s large size and ornately patterned bezel make it look like a piece of Japanese armor, lending it an air of strength and fierceness that is lacking from the Origin watches. Every G-Shock watch is built with the same unyielding standards of quality, but each model and series finds its unique way to showcase that strength in its design.

How can we find a fresh way to describe the power that echoes this model’s sensibility? This question prompted Casio to respond with an image of Zen. The Origin line simplifies the G-Shock concept by removing unnecessary features. These watches are a perfect example of the brand’s commitment to producing reliable products that withstand extreme conditions. The series’ emphasis on developing one’s character through introspective reflection is reminiscent of Zen Buddhism. The “ao-zumi” (blue ink) mentioned above, believed to have calming and peace-inducing properties, was crucial in bringing out this sensibility in an Origin watch. In contrast to the bold, aggressive nature of the MR-G model, the Origin series iteration painted in this color exudes a calm confidence.

Traditional models of the full-metal Origin watches feature ion plating on the bezel and bracelet (or each of its links) for an accent color or laser engraving for a patterned surface. Since the MRG-chassis B5000 consists of discretely sized parts, finer-grained, pinpoint coloring can be implemented. Ion plating highlights the concave surfaces at the four corners of the case and the bracelet screws, while vapor deposition is used to color the outer edge of the MRG dial. B5000BA’s DLC-coated black case and bracelet with hints of blue coloring create a feeling of tranquility imbued with an inner strength unlike anything seen on a G-Shock watch before.

The MRG-B5000BA is a model with a distinct idea thanks to advanced Japanese materials and the “ao-zumi” (blue ink) design theme. This goes beyond a simple hue shift. Inspired by the idea of making the best possible metal watch, the designers at Origin have come up with a brand new design for their latest timepiece, which they credit to their meticulous attention to detail when choosing their components. A wider variety of styles in the MR-G lineup may be on the horizon in light of this new color option.

What you can read next 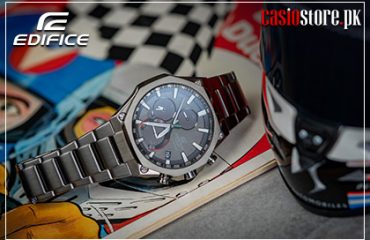 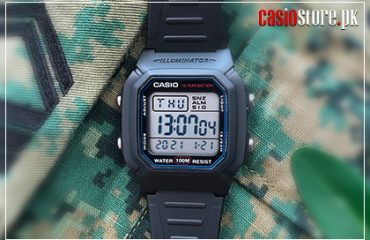 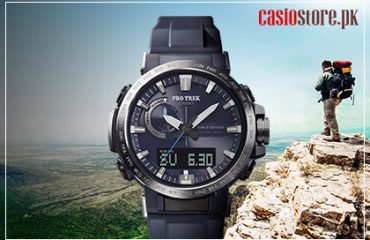